⚓ Hot off the Press!

There has been plenty of cruising industry news to hit the press already this week, and it’s only Wednesday! Two premium brands, Cunard Line and Azamara Club Cruises have announced the launch of a new ship in each fleet – exciting stuff! Both cruise lines have released a few teasers to the public but nothing too substantial. We’ll all have to stay tuned for further updates in the coming months.

Firstly, the iconic cruise line, Cunard Line has announced it is adding a fourth ship to its fleet (hooray!!). The new ship will be built in Italy and will join Queen Mary 2, Queen Victoria and Queen Elizabeth as part of the iconic Cunard fleet in 2022. The new ocean liner will have capacity for 3,000 passengers at 113,000 tonnes and be built by Fincantieri.

This will be the first new Cunard ship in 12 years, making it the first time since 1998 that the Cunard Line will have four ships simultaneously in service. At this point in time the ship remains unnamed but no doubt, her name will be revealed in the coming months/year.

As one of the most iconic brands in the cruising industry, Cunard offers a fleet of unrivaled vessels and one of the most unique travel experiences in the world. Distinct Cunard signatures, such as white-gloved service, high teas, grand balls and wide teak decks, and brand new experiences will combine as part of this next generation of the Cunard fleet and I am eagerly awaiting the finer details of this ship to be unveiled.

It’s said that Cunard’s investment forms part of the company’s “ambitious plans for the future of Cunard globally” and that it will reveal further details on the new addition during 2018 and through to its launch, so stay tuned. For now, however, you can check out this link to see what’s in store for the fleet.

Azamara Club Cruises has today announced it is is expanding its fleet with Azamara Pursuit in 2018. The new addition to the Azamara flagship will see it visiting ports/destinations never visited before by Azamara and it will also visit ports that this cruise line has not visited in a very long time – super exciting!

The new addition, the Azamara Pursuit, is comparable in size to the Azamara Journey and Azamara Quest. As such, it will also allow visits to unique ports that larger ships are unable to reach. Together, the three ships will support the brand’s commitment to enrich destination immersion around the world, by staying longer in port to allow guests to experience more. Azamara Pursuit brings new possibilities to explore with local focus and authentic spirit that distinguish every Azamara voyage.

Details on new destinations and ship board news for Azamara Pursuit will be available in October but for now, check out this short video from Azamara Club Cruises’ President/CEO, Larry Pimentel. 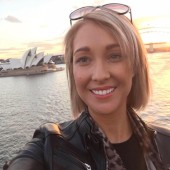